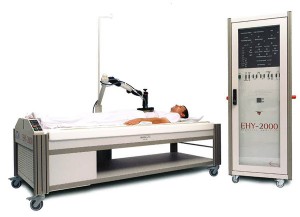 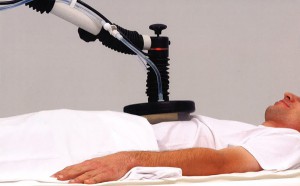 Oncothermia selectively heats the tumour tissue in the region to be treated. For this reason, Oncothermia is particularly indicated for the treatment of localised solid tumours. It does not matter whether the tumour is located on the surface or deep down. The principle of self-focusing also allows moving regions of the body to be treated, such as the lungs, or thermo-sensitive regions such as the brain. Oncothermia is effective both in areas with high blood fl ow, such as the liver, and in regions with high air circulation, such as the lungs. During treatment with the EHY-2000 plus the patient lies on the water bed. The electric field is set up between two electrodes: the bolus electrode positioned at the site where the patient is to be treated and the counter electrode positioned under the mattress of the water bed. During the treatment, thanks to the interaction between the electric field and the heat, selection at cellular level takes place, the system self- focuses on the tumour and apoptosis is increased.

The EHY-2000 plus is based on its predecessor model, the EHY-2000. It has been improved by taking into account the experiences of our doctors and experts, and the requirements of patients and the people treating them. The treatment is carried out at a frequency of 13.56 MHz. The EHY-2000 plus is easy to use and is made up of very clear component parts. During treatment the patient lies on the water bed and becomes part of the electric field via the bolus electrode. The system’s electronics are housed in the generator unit. A mobile computer unit allows the doctor to view and save the treatment data. If necessary, this system can also be equipped with accessories such as a printer.

The EHY-2000 series grows: A new space-saving system type has been developed

The EHY-2000 series has been part of Oncotherm’s system range for many years. Over time, the series has been developed into two different system types which can both treat cancer in the same way but the designs of which have been adapted to the different conditions in hospitals and doctors’ practices.

Compared to the EHY-2000 plus, which consists of a bed with water mattress, a generator unit and a computer system, the EHY-2010 takes up considerably less space. It is therefore particularly suitable for treatment facilities that only have small rooms available, and are unable to store a generator unit in the available space. This design was created according to our customers’ suggestions, in order to do them justice. In the EHY-2010, the electronics are incorporated in the actual bed, so the system, with dimensions resembling those of a normal bed, can also be kept in very small treatment rooms.